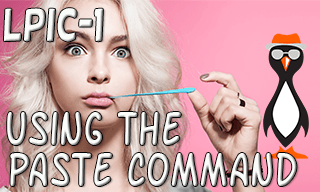 The Linux Professional Institute LPIC-1 101 exam requires that you have a knowledge of a number of commands that can be used to manage text files. One such command is the Linux paste command. I know that this is something that many Instructor struggle with especially when trying to come up with ideas of how the command is used. The Linux paste command is quite simple really, it takes two or more files and combines their data. Line 1 of both file1 and file2 will appear together in the new file as line 1.

I am Lost Already

Ok, I can tell I have you confused already, so let’s take a look at two files and use the paste command to join them. The first file is called users with the following three lines:

The second file contains department names and is called departments :

Using the Linux paste command we can join these two files together:

Create the files and try it running the command on your system.

But What is the Point

Now this is where it can seem difficult to understand because the data that is being joined has no relationship. We are not saying the the user bill should be in sales and so on. The resulting file in this case does not have any meaning. However, if we had users in one file and passwords in another we can use it to set new passwords for users using the Linux command paste and chpasswd. We just need to have the right data to make sense of the Linux paste command.

For a practical demonstration on using the Linux paste command we will set passwords for newly created users. In setting the passwords we will use randomly generated passwords created with the command pwgen. We are running the demonstration on Ubuntu so you can install the package with.

We can generate passwords then from the command line. If we want 8 character passwords and we want say three passwords created we can run the command:

Where -1 ( dash one) creates a list of passwords. 8 represent the desired password length and 3 tells the command to generate 3 passwords. The -B option avoids using difficult to read characters such as the 0 and O. Lower-case o can be used but pwgen will not generate passwords containing zero or Upper-case O as they can be difficult to differentiate between those characters.

If we want to create the file containing passwords to use for the new users then redirect the output to a file:

We now have a file containing the 3 passwords on 3 lines.

To ensure that we have the : between the user name and password we use the -d option with paste. In this way we use the colon to delimit the two fields rather than the default TAB.

We redirect the output to the new file which we have inventively named user-passwords. The content of the new file will look similar to this:

Exactly the way we want it for chpasswd.

Now we need to create the user accounts. Obviously, we can only set passwords on users that exist.

With the users created we need to set their passwords:

And we are done. More importantly we have seen a practical usage of the Linux paste command.